Vittorio will be playing the National Anthem on his electric guitar tomorrow, Wednesday, April 27 to open the 12:45pm San Francisco Giants baseball game!

After reviewing hundreds of e-mails from V Squared fans sharing why they are Vittorio’s biggest fan and would like to watch the game with Vittorio in V Squared’s Dugout Club seats, TWO fans have been selected.

Two fans were selected because V Squared has two distinct fan bases. Teen girls love V Squared for obvious reasons, but V Squared also has a huge adult fan base who love V Squared’s classic rock sound and appreciate that Vittorio and Vincenzo are writing new rock songs with a sound from the past and are carrying the torch of Rock N Roll for the next generation of rock fans.

So here are the e-mail and photos of the two, lucky V Squared fans who will be joining Vittorio and Vincenzo tomorrow to watch Vittorio play the National Anthem and sitting in Dugout Club seats to watch the Giants game…

I would love to see you play the national anthem at the Giant’s game and to actually join you for the game.

I was amazed when I first heard your original music. I was simply blown away by your talent. Over the last four years I have traveled from San Francisco to Santa Rosa to attend every one of your concerts and they were all amazing. I have no doubt you are going to be one of the greatest rock guitarist of all time.

Seeing you play the guitar up close and personal had a profound effect on me. I was actually inspired to pick up my electric guitar after a TWENTY year break and to begin learning in earnest. One of the first songs I learned was my favorite V Squared song, ‘We Are V Squared.’ The process was so much fun!

The attached picture shows me in my Giant’s gear (I’m also a big Giant’s fan.) along with my Gibson guitar and Crate amp. The picture is a tribute to how you have inspired me. I would be honored, grateful and very excited to join you for the game. I can’t wait to see you rock the National Anthem on your Gibson SG. 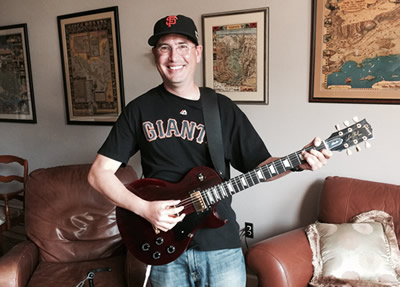 I know that many fans will apply for this contest and I’m hoping that being one of your fans when you were only 9 years old and seeing every one of your shows, and the fact that you inspired me to pick up my guitar and start playing again puts me in consideration.

I am your biggest fan because I love all your music! I think the way you play rock anthems is amazing! I really like listening to the songs you have written; I think it’s awesome that you write your own songs!

I am really looking forward to see and hear you play the National Anthem at the Giant’s game on Wednesday. (Hint.?? Hint.)

I have so much fun at your concerts. It’s super exciting to see you perform up close!

Vittorio, it’s so cool watching you play your guitar! You are so good at it. I love your guitar pick with the logo on it because your logo is really outstanding.

Vittorio, I really like the moves you make on the stage. My favorite one is when you leap into the air, do a slide on your knees and you end making a pose with your guitar. 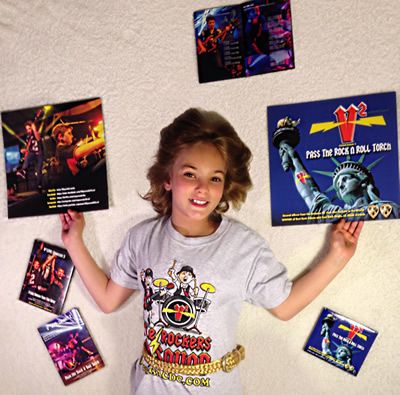 I am also a fan of the Giants. I have been to see their games, but I have never gotten to sit in a box. I’m looking forward to it!

Hope to see you on Wednesday!

I will be contacting you by phone today to give you the details on where and when to meet at ATT Park tomorrow.

Thanks to all who submitted e-mails and photos. There will be other fan based contests in the future so keep watching and keep participating.

Lamont and Tonelli learn something new about Vittorio and Vincenzo from a 107.7 The Bone listener