The premiere rock blogs are now picking up the amazing story of Vittorio and Vincenzo.

Check out this V² interview by BackStageAxxess: 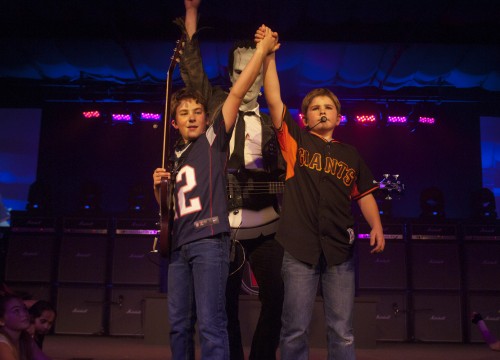 We at BackstageAxxess are always proud when we can feature a band who we feel might be the next up and coming big name. This is what have here with V². Brothers Vincenzo and Vittorio are 11-year-old twin boys and together form V². The band hails from the Los Angeles area. Vincenzo plays drums and Vittorio plays guitar. It’s amazing what they have accomplished up until this point. They already worked with famed producer Ron Nevison, as he produced their first album titled “We Are V²,” plus they have been nominated in 7 different categories for The Los Angeles Music Awards; a feat never attained by any other artist! They already accomplished these milestones and again, they are only 11 years old!

To show how talented they are, they were considered one of the remaining finalists to open for AC/DC this summer. This is the band that first got them interested in music. We will talk about that and how they are able to go to school and still focus on their music. In addition, we discuss how they are getting support from their classmates, teachers and most importantly, their family.

Welcome the next generation of artists to BackstageAxxess, V²!

BA: Your first record titled “WE ARE V²,” was released February 24, 2015 via Rock Star University Records. Who wrote the songs and music for the disc?

V²: (Vittorio) With the exception of High Voltage, the AC/DC cover, Vincenzo and I wrote all the songs on the disc.

BA: Vittorio, you play guitar and your brother, Vincenzo, plays the drums. Who did you get to play bass on “WE ARE V²” and who plays bass when you play out live?

V²: (Vincenzo) The bass player is Vittorio’s guitar instructor, Cameron Peterson. We dress him up in a Frankenstein costume and he carries Vittorio in on his shoulders with Vittorio playing the opening chords to the first song at our concerts. (Vittorio) Yeah, its pretty cool. Cameron is a great guitar instructor and plays a wicked bass.

BA: How did you boys get hooked up with such a legendary producer like Ron Nevison? What was Ron’s first reaction when he heard you play?

V²: (Vittorio) Someone told Ron about us and he dropped by one of our rehearsals. We did not know who he was but we rocked the rehearsal like we would do for anyone who might be watching. After the rehearsal was over he introduced himself, told us we were great and he would like to produce our first album. Vincenzo asked him who he had produced in the past and when Ron started running off the list of classic rock legends we have listened to on the radio, we knew we wanted him to produce our record. (Vincenzo) Yeah, Ron didn’t need to twist our arm. We really liked him from the start. He’s very cool.

BA: What was your first introduction to music?

V²: (Vittorio) Before we were born our mom sang in a classical music choir. Classical music was playing in the room when we were born and our mom played it in the car everywhere we went with her. By the time we could talk we could recognize all the great composers because she would quiz us on them in the car as their musical pieces played on the radio. (Vincenzo) She started teaching us classical piano and acoustic guitar when we were about 7, but we didn’t like it. (Vittorio) One day when we were driving with our dad in his truck, we were complaining about having to learn the piano and acoustic guitar. He told us a story about two brothers named Malcolm and Angus Young, who attended Catholic School just like we did and started playing in a band. We asked what happened to them and he said they became Rock Gods and he put AC/DC’s Back in Black CD in the truck’s stereo. We listened to the whole CD. The sounds were awesome!

(Vincenzo) When the CD was done we told our dad that we wanted to play music like that! (Vittorio) Our dad smiled and said, “I hoped you’d say that.” He then drove us down to the music store and bought us a drum kit and electric guitars. (Vincenzo) We started making noise with them and about a week later a guitar and drum instructor stopped by the house and we had our first lessons.

(Vittorio) Three months later we slayed our Catholic Talent Show by playing AC/DC’s Back in Black, TNT and Highway to Hell. The first original song we wrote is called Long Live Rock N Roll and it tells out story. It tells how we became rockers. The lyrics are:

Before we were born, while still in her womb
Mom played the classics, filling the room
Handel, Tchaikovsky, Mozart and Bach
Beethoven, Brahms, we never heard any rock

When we hit the ground, classics kept on playin’
Heavenly music, Mom was so fond of sayin’
Handel, Tchaikovsky, Mozart and Bach
Beethoven, Brahms, we never heard any rock Long Live Rock and Roll

Then one day it struck, like a bolt from the blue
We heard the Rock Gods, we knew just what to do
So we cranked up the amps, laid down the beat
Struck the power chords and started moving our feet

(Vincenzo) The part about “When we heard the Rock Gods, we knew just what to do” refers to when our dad played AC/DC’s Back in Black for us in his truck the day when we were complaining about mom making us learn the acoustic guitar and piano.

BA: What do your classmates think about your music career?

V²: (Vittorio) They think its cool, but I think the teachers like what we are doing even more. Some of the teachers in our Catholic school secretly admit to us that they are big hard rock fans and love our music.

BA: Most kids are not into classic rock. Do you get ridiculed by your peers for your musical direction?

V²: (Vincenzo) No. Not at all. When we played our Catholic School talent show, kids rushed the stage and we were signing autographs after the show. It was cool. Our classmates like coming to our concerts.

BA: Where were your first gigs?

V²: (Vittorio) Our first public performance was at our Cub Scout’s talent show and then our Catholic School Talent Show when we were 8. By the time we were 9 we were playing 12 song concerts at Rock Star University’s rock venue in Santa Rosa. That’s when the local classic radio station found out about us and then the local newspaper and it just built from there.

BA: How tough has it been to get support since you both are only 11 years old?

V²: (Vincenzo) We have not noticed any problems with getting support due to our age. (Vittorio) Yeah, if anything, because we are only 11, people are kind of shocked that we have 25 original songs and can play 6 AC/DC covers note for note. (Vincenzo) But I think we do get overlooked for opening for major bands or getting picked for opening up on tours because we are under 18. (Vittorio) Yeah, Rock Star University was told by AC/DC’s tour management that we were on the short list of 12 bands being considered as the opening act for AC/DC’s European tour but we were not selected. (Vincenzo) Yeah that hurt. To be able to open for our heroes would have been so cool. (Vittorio) And it was over the summer so we would not have missed any school. (Vincenzo) Hopefully they will keep touring every couple years and will pick us next time.

BA: Due to your age, how will you be able to take your music to the masses (ex. touring?)

V²: (Vittorio) Right now, we are just building up our fan base on our Facebook page: www.facebook.com/VSquaredOfficial and our website: V². Next year we will start holding concerts at Rock Star University in Santa Rosa every couple weeks and will stream them live to our fan base. (Vincenzo) We are ready to open for a major rock act on a stadium tour. Just call us. We are all tuned up and ready to play.

BA: What lies ahead for the band?

V²: (Vittorio) We already completed our second album, Pass the Rock N Roll Torch. We’re not going to release it until our debut album does whatever its going to do. The title track to We Are V² is still doing well in the digital radio charts reaching number 1 on Digital Radio Tracker for Rock Artists and Independent artists. “Vincenzo And Vittorio’s blues song,” and “The First Time I Ever Tried” is getting heavy rotation on college radio blues programs so we hope other songs on the album will break into Billboard’s Hot Singles Sales charts like We Are V² did. (Vittorio) We are just going to keep rockin’ and writing songs. (Vincenzo) We keep a tight rehearsal schedule so if we get the call to open for one of the classic rock bands who have inspired us, we are ready to step in slay it. (Vittorio) Yeah, we just keep on rockin’. We have plenty of time. We are only 11.

BA: Thank you for taking the time and good luck with your music careers!

V²: (Vittorio) Thank you for supporting us. (Vincenzo) Yeah, You rock Gus! 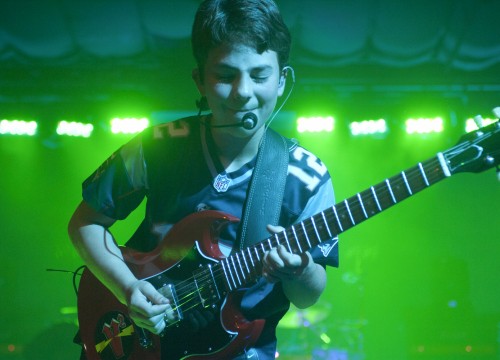 We would like to thank Aaron Feterl from MSOPR for setting up the interview with V². For more information on the band, please go to: V².

We Are V² moves up to #3 on Billboard’s Hot Singles Chart!