The premiere rock blogs are now picking up the amazing story of Vittorio and Vincenzo.

We argue this all the time with old rockers who say Jimmy Page was the best guitarist ever blah blah blah. Fact is, time rolls on, and players get better and better younger and younger. Sure, “feel” and “great songs” is a learned trait, but I defy those who think you have to be past 25, 20 even, to solo with as much feel as some old dude from the 1940s or ‘50s. It’s reverse ageism through and through. These concepts are abstracts and one can’t be objectively correct with them.

Putting all this into practice far beyond a youtube Metallica cover are 11-year-old twin brothers Vittorio on guitar and Vincenzo on drums, who have a full-length album under their tiny belts, produced by Ron Nevison no less, patron knob-twiddler for Bad Co, Zep and UFO. 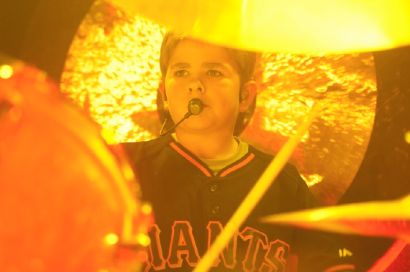 Sure, their record courts a form of party metal that sounds like Lita Ford and her Twisted Sister—the guys are 11, but the vocals still come as a shock—but one should support V2 for keeping power chord-wrapped guitar rock alive, and specifically, for all them dads struggling to turn their kids onto music that is more than 20 vocals and 20 more laptop-generated sounds (how’s that for a sorry description of pop?).

“Once we decided we wanted to play rock, and we wanted to enter our school talent show as V2, we just practiced every day with our instructors,” begins Vittorio, asked how the heck this happened. “I would get a private guitar lesson every day and Vincenzo would get a private drum lesson every day. After the private lesson, we would come together and practice as a band with the instructors helping us. We made the fastest progress in the first year, when we were eight, but every year we get more solid as musicians and tighter as a band.”

“We were getting better and better every week,” says Vincenzo, “and learning more and more AC/DC songs. After learning ‘Back in Black,’ ‘Highway to Hell,’ ‘Dirty Deeds,’ ‘TNT,’ ‘High Voltage’ and ‘Long Way to the Top,’ we started writing our own songs. The last year we have made the most progress vocally. Once we found our voice coach Raven Kane, we really started singing better. Musically, with an instructor every day, we make more progress because we are practicing perfectly. Yeah, if we had tried to do it by teaching ourselves when we first started, we would still be trying to learn ‘Back in Black!’”

Indeed one can hear the AC/DC influence, which emerges more toward a smooth and bright sort of hair metal, i.e. a little more complicated than Angus and Co. But the effect is underscored by Vittorio’s soloing style, which is more Angus than anyone, but again, generalized toward an amalgam of classic metal guys along accessible lines.

“Why? There is no other guitarist like him,” says Vittorio. “He takes over the stage. Doesn’t matter who is singing. He commands all the attention and plays perfectly as he is running around like a rabid dog. I have studied footage of him when he was young and it is crazy good. He has slowed down a lot, but he is still the one and only Angus Young. He is genuine. He owns who he is. He plays like the guitar is part of his soul. I mimicked his style in the first year when we were learning AC/DC tunes, but as we started creating our own songs, I really wanted to master the feel of the guitar like Angus does, bending notes and playing fast riffs with the feeling and smoothness that Angus has.” 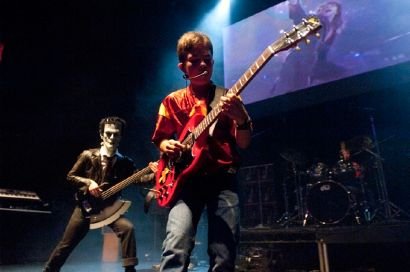 It must take supportive parents to acquire this level of music skill this rapidly. Mom and dad… rockers?

“My mom is into classical music,” says Vittorio. “My dad is the rocker,” Vincenzo adding, “Our first original song, ‘Long Live Rock N Roll’ tells that story. The part about ‘When we heard the Rock Gods, we knew just what to do’ refers to when our dad played AC/DC’s Back in Black for us in his truck one day when we were complaining about mom making us learn the acoustic guitar. We told him we wanted play music like the guys playing Back in Black. So he drove us down to the music store and bought us a drum kit and electric guitars (Vittorio: The next week our instructors showed up and we started learning ‘Back in Black’). Mom was pissed-off at Dad for a long time after that.”

Eventually the guys added Frankenstein on bass and V2 was born. “Frankenstein is Vittorio’s guitar instructor,” says Vincenzo. “He is about 30 so it didn’t look right having an adult playing with eight-year-old kids so we thought it would be cool to have him be Frankenstein since he is so tall.” Vittorio: “Yeah, when we do live shows I come in on Frankenstein’s shoulders playing the opening chords to whatever song we open with. It is pretty cool.” 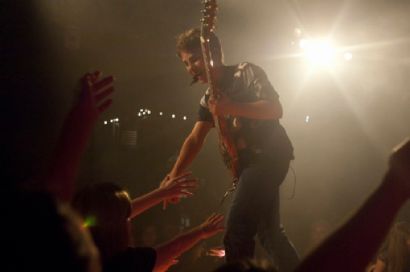 Regular kids who get straight A’s and play baseball and golf—mom says college or bust!—Vittorio and Vincenzo are nonetheless quietly acting as missionaries of rock, converting one pop-afflicted adolescent at a time.

“Yeah, well, we love our Aerosmith, Led Zeppelin, Bad Company, Lynyrd Skynyrd,” says Vincenzo. “We like Van Halen too and I guess we are more like them since Eddie played the guitar and Alex played the drums. I think more kids would be rockers if they were exposed it. That is kind of our purpose, I guess. Introduce kids our age to the classic rock sound by writing and playing new rock songs with a sound from the past.”

“We like all the classic rock bands and their sound,” adds Vittorio in closing. “We listen to classic rock stations. Our friends listen to pop and hip hop, but when they come to our concerts they tell us they love our music. Plus they are now exposed to so many more young kids on the Internet playing their instruments. They see a kid shredding a guitar at a young age and say to their parents, ‘I want to do that!’ If the parent gets them a guitar and some lessons, they have a shot at doing it too.” 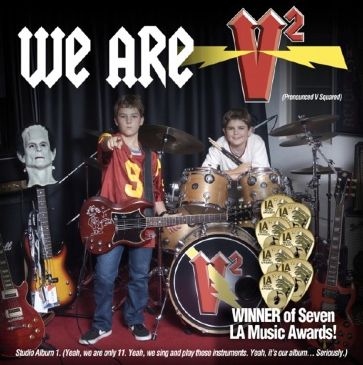 Here are a few photos from their recent concert… 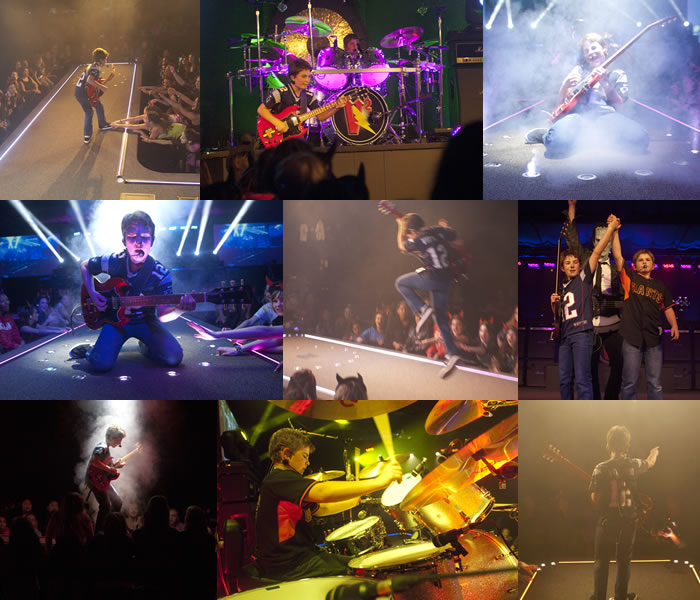 Did you miss V Squared’s Radio Rockumentary? No worries. Listen to it here…

Vittorio and Vincenzo named to Top 100 by Music Connection Magazine