Vittorio and Vincenzo were in San Francisco over the weekend and much to their surprise found themselves in USA Today, the nation’s newspaper!

The article with color photos cover their historic sweep of 7 categories at the 24th Annual Los Angeles Music Awards show.

A week earlier, Vittorio and Vincenzo were notified by fans that they were in the New York Times! So they went to Starbucks for a hot chocolate and grabbed a New York Times to read the article. 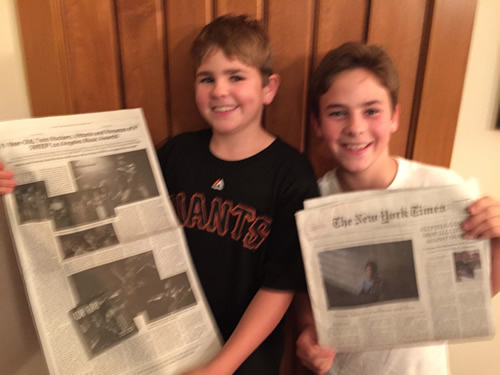 Record of the Year: WE ARE V²

Rock Album of the Year: WE ARE V²

Rock Artist of the Year: Vittorio and Vincenzo of V²

Hard Rock Band of the Year: Vittorio and Vincenzo of V²

Guitarist of the Year: Vittorio of V²

Vitttorio and Vincenzo all over SF Bay Area radio stations…

Story about V² on short list to open for AC/DC discussed Lamont and Tonelli on 107.7 the Bone

We Are V² hits #6 on Billboard’s Hot Singles Chart!

We Are V² is #1 again on National Radio Airplay Chart!