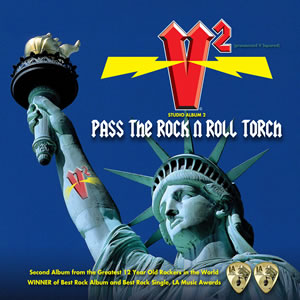 This year, the 25th anniversary of the LA Music Awards was held at the world famous Whiskey A Go Go on Sunset Strip in Hollywood, a venue that has launched the careers of some of the most famous LA rock bands like The Doors, Motley Crue, and Van Halen, and played host to the greatest rock stars in the world including Janis Joplin, Aerosmith and Led Zeppelin just to name a few.

The boys walked the red carpet and then took the stage to thrill the crowd of seasoned rock fans with three songs: Pass the Rock N Roll Torch, Guitar Man, and Long Live Rock N Roll.

After their performance they were awarded, Rock Album of the Year, Rock Single of the Year, and a special Best Rock Documentary for the documentary, V2 Behind the Scenes: The Making of 11 Year Old Rock Superstars, which aired on MTV’s Palladia Network.

Watch for the video footage of V Squared historic Whiskey a Go Go performance in the coming weeks.

Vittorio and Vincenzo interviewed by DJ Kellie Gates on 97.7 The River rock radio