If you were one of the lucky rock fans who was able to score a ticket to the V Squared /Bret Michaels show last night you are probably telling all your friends today about the epic rock show you witnessed. 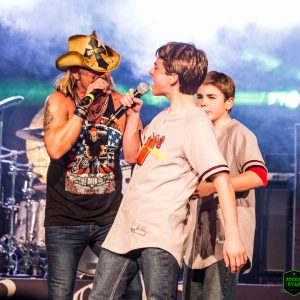 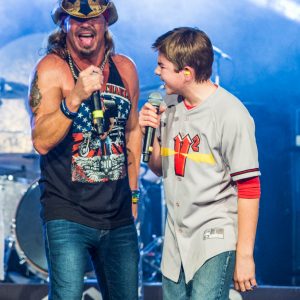 V Squared wowed the crowd by opening the show with a 9 song set of the their favorite, classic rock covers with some of their original songs that have reached #1 on Internet rock radio.

Bret Michaels followed with the best, most high energy, rock star performance we have seen at the House of Rock. Bret proved why he is one of the top Rock N Roll frontmen of all time!

This type of up close and personal show, like V Squared and Bret were playing just for you and your friends, is what the House of Rock was built for. Congratulations to all who were able to witness such a spectacular show.

For his last song, Bret brought Vittorio and Vincenzo back on stage to join in on his favorite KISS cover, Rock N Roll All Night and Party Every Day.

Here is an iPhone video that one of the audience members captured.

Watch for the e-mail release of Vittorio and Vincenzo’s new album, Rock N Rods in the next week and look forward to seeing Bret Michaels again at the House of Rock!

Thanks for being a fan of the House of Rock!

V Squared asked by Little Big Shots producer to submit video for consideration. Here it is…